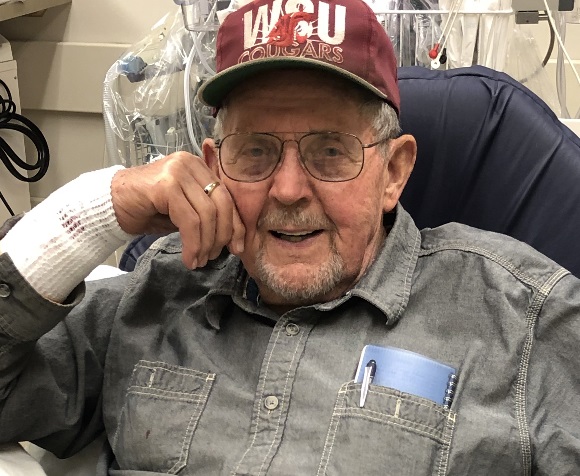 Eugene, “Gene”, 89 years old, was born to Henry J. Robertson and Lillie A. Johnson Robertson in their home at 1046 N. Beach St. in Marysville, WA on October 3, 1932. He was born the sixth of eight children, under the adoring eyes of Bernie, Hazel, June, Helen and Shirley, followed by Richard and Elaine, and they called him, “Beaner”. Gene joined those that have gone before him on February 18, 2022, after a 6-year battle with Multiple Myeloma. He passed away peacefully surrounded by his loving family.
An avid storyteller, Dad would share stories about growing up on Beach Street and adventures crossing the land that is now I-5 to get to the Tulalip Reservation and Quil Ceda Creek. Growing up during the Great Depression was challenging for the family. Despite the difficult times, Dad remembered fondly, that with a milk cow, a dozen chickens, fruit trees, berries, a garden and a large root cellar they “went to town and stood in line for flour and sugar and that was it. The rest we did on a half-acre in town.”
A Marysville boy through and true, Gene graduated from Marysville High school in 1950 and married his high school sweetheart, Patsy A. Manier on his 20th birthday, October 3, 1952. Their first daughter Connie was born in 1953, followed by​ son Bud in 1955, and daughter Jann in 1956.  Dad’s love of lumber, building and farming began at a very young age, when he began driving a logging truck at age 17, delivering lumber for construction and feed to farmers. In 1957, he built our first family home on 51st Ave NE. Together, Dad and Mom started Gene Robertson Home Builder in 1958. Mom designed the houses while Dad and the crew developed a reputation for building high-quality homes throughout the greater Marysville area. In 1979, Dad opened up a lumber business and took great pleasure in supplying and delivering loads of lumber to jobsites all over Washington state.
Dad had a passion for baseball. He was proud to be the catcher for his MHS baseball team and would never tire of touting about when his team won the county baseball championship. He became one of the first and youngest Marysville Little League coaches in 1950. Dad was excited that the Seattle Mariners were becoming an MLB expansion team in 1977 so he bought season tickets and spent many years watching Mariner baseball in the King Dome and later Safeco Field. His family still enjoys those season tickets.
Another one of his proudest moments at MHS was winning the State FFA Dairy Judging Contest. He aspired to be a dairy farmer and came close to buying a small farm at Kellogg Marsh – a dream that was not meant to be. In 1976, when Jann was attending WSU, Dad made his first trip to Pullman for Dad’s weekend, and instantly became an avid Cougar fan. There was nothing he liked more than loading up the motor home and heading to the Palouse for tailgating and a football or baseball game. Often, he and his buddies would enjoy some bird hunting along the way. In later years, he was excited to watch two of his granddaughters graduate from WSU and recently a third that received her Master’s degree. He worked very hard at finding farmer husbands for those granddaughters that attended WSU and he never gave up trying. Dad loved Eastern Washington, his close farmer friends there, and retelling the fun stories we all had in Pullman.
In 1976, Gene and Patty divorced but remained good friends until her death. In 1980, he married Sharon Martinez, becoming a stepdad to David, Tony and Analiese’. Gene and Sharon eventually bought waterfront property in Stanwood on Warm Beach, where he loved relaxing on the deck while sipping a Black Russian, enjoying the view and the beautiful sunsets, and keeping track of the wildlife.  Some days he would take the boat out into the bay and go crabbing or fishing.  Any day on the water for him was a great day!
When talking about his life, Dad would always say, “I’ve had nothing but a good time and I’d do it all over again!”  He lived his life to the fullest and he did it “his way”. He was a loving Dad, Grandpa, Great-Grandpa and Brother and we will all miss him dearly. Dad was preceded in death by his parents, brothers Bernie and Richard, sisters Hazel Hammond and Shirley Lumsden, first wife Patty, and stepson David Martinez. He leaves behind sisters June Duvall, Helen Cook, and Elaine Kinslow as well as his former wife and good friend Sharon Montgomery. He is survived by daughter and son-in-law Connie and Steve Kukull, son Bud Robertson, and daughter and son-in-law Jann and Leif Barem.  He loved and was very proud of each one of his grandkids and leaves behind Kara Kukull and husband Darren Wilcox, Kyla Coromilas and husband George Coromilas, Kacee Kukull and husband Tim Erickson, Corey Robertson and wife Kelsey Robertson, Katey Robertson and Larry Cenotto, Kelley Robertson and Beau Robinson, and Mikalah Barem.  He held a special place in his heart for his great-grandchildren; Isla Wilcox, George Coromilas, Jameson Wilcox, Hazel Coromilas, Henry Robertson and Baby Robertson-Cenotto due in July.  Gene also leaves behind many nieces and nephews, step grandchildren and step great-grandchildren. Gene had many dogs throughout his life and leaves behind his favorite lawn mowing and lap buddy, Paco, who was always there to ride with him on the mower.
A graveside service will be held on Saturday, March 19, 2022 at 1:00 pm for family and close friends at Zion Lutheran Cemetery located at the Little White Church on the Hill, 23605 Pioneer Hwy, Stanwood, WA. There will be a ‘Celebration of Life’ for Dad later this year. In lieu of flowers, memorials may be made to your favorite animal welfare organization; The Marysville Historical Society at 6805 Armar Rd, Marysville WA 98270; or a charity of your choice.
Arrangements are being made by Funeral Alternatives in Marysville.