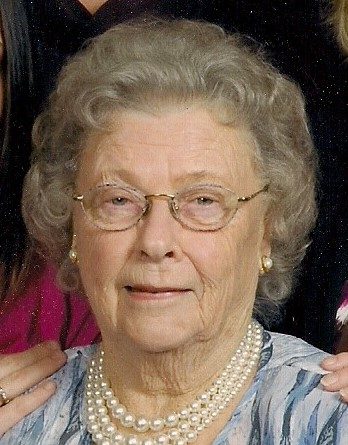 Shirley Elaine Jacobson passed on to her forever home April 5th 2022 surrounded by loved ones. She was born in Minneapolis, Minnesota on January 3 rd 1929 to Henry and Josephine Rasmussen. The family moved to Snohomish, Washington in 1944 where she graduated from Snohomish High School class of 1947. She worked at the Seafirst Bank in Snohomish until she married Andrew Jacobson September 23, 1950. They moved to the Jacobson family farm and raised three children where she loved being a homemaker and they shared 46 years together until he passed April 15 th 1996. She was a member of Ebenezer Lutheran Church for 59 years. She was a Sunday School and VBS Teacher, she attended bible study classes, also enjoyed scrapbooking and quilting. She would also be found cheering on her children, grandchildren, and great grandchildren while they were playing sports, and racing. She loved the Lord Jesus and taught all of her children and grandchildren about the Lord. She told us numerous times she wanted to go Home to Heaven!

A special thank you to all the staff at The Gardens at Marysville, to Pastor Benson and the Ebenezer church family, and to Providence Hospice of Snohomish County.

In lieu of flowers, contributions may be made in Shirley’s name to Ebenezer Lutheran Church or Providence Hospice of Snohomish County.