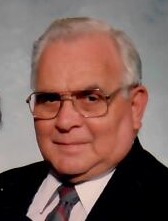 Jack was born November 23, 1926 in Pine, Oregon to Charles E. and Donnie C. Estes.  He served as a Merchant Marine radioman and was a 38-year employee of Boeing.  In 1965, he married Lila Mae Souder and settled on the family farm in Startup.  He raised beef cattle and volunteered as the Evergreen State Fair 4-H Beef Superintendent for years.

He is survived by sons Frank (Celeste) and Charles (Laura) and was preceded in death by wife Lila, daughter Marla and brother Richard.

A Masonic funeral will be held at a future date.  In lieu of flowers, please give to a charity of your choosing.