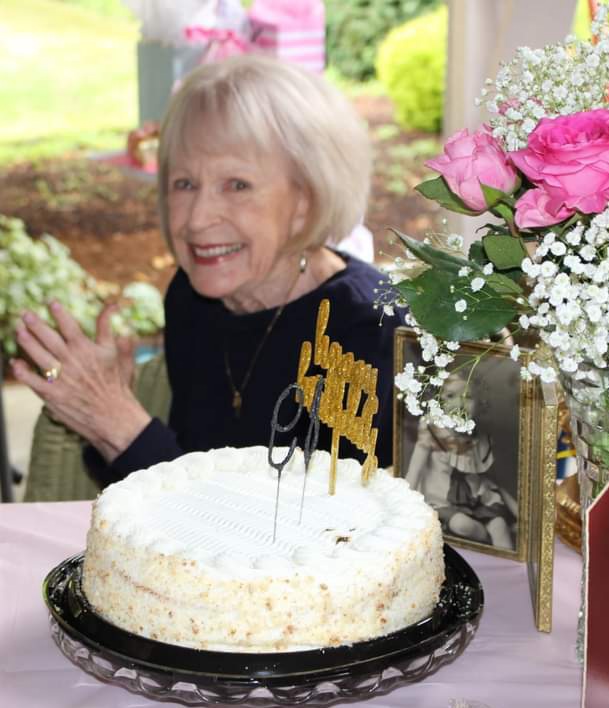 Jean Galbraith, wearing a crown loaded with precious gems she had earned for kind, good deeds, ended her journey on this earth on January 21, 2022 surrounded by her daughters after a brief illness.  She is now reunited, and probably dancing, with her loves Alvin and Buster, her twin sister Joyce Rosser, grandchildren Blair Hyatt, Ashton Dry and Nolan Meece.

Jean was born August 3, 1932 in Sumas Washington to Joe and Winnie Ristine.  She grew up in Maple Falls and met the first love of her life, Alvin Galbraith at Mt. Baker High School and settled in Acme Washington where they started their family and life together.  Jean moved to Darrington in 1960 when Galbraith Brothers Logging Co. started a job that was to last two years.  Jean would frequently say “it was the longest but best two years” as she resided in Darrington for the rest of her life where she raised four daughters and was active in the Darrington community.  Jean had a loving family and, following Alvin’s death in 1984, she ignited a twinkle in the eye of former Mt. Baker Mountaineer Glendon “Buster” Meece, (who greeted her in heaven with a “hey gal”) the second love of her life, and was blessed with a beautiful extended family.  Jean was affectionately known as “Gigi” by her 16 grandchildren, 26 great grandchildren and many dear friends that came to know Jean.  As the family matriarch – and 1949 Whatcom County Strawberry Queen – she was the family’s Queen Jean.  Jean’s immediate family are daughters Michelle (Mack) Hyatt of Marysville, Melissa (Chuck) Holiman of Marysville, Kim (John) Broten of Whitehouse Station, New Jersey, Jodie (Ted) Dry of Marysville, sister Joan Abernethy of Bellevue, sister-in-law Mary Lea (Galbraith) Johnson of Bow and numerous nieces and nephews.  Her extended family are Cindy Anderson of Darrington, Mark (Diane) Meece of Darrington, Kristi Reece (Bill Wright) of Blaine and Brad (Mikie) Meece of Darrington.

Jean worked for many years at the old Darrington Hardware Store where customers sought her advice on sewing, knitting, home decor, fashion, cooking and baking – especially her famous blackberry pies.  She loved to travel and made several trips to Europe, Mexico, Hawaii and numerous places throughout the United States.  As loyal Seahawks fans, Jean and Buster were longtime season ticket holders and looked forward to attending home games and spending weekends in Seattle.  When watching games on TV she preferred to be at home because at other places “there is so much talking you can’t really watch the game”.  AND there was SHOPPING.  Jean loved to shop – It didn’t really matter where – as long as there were aisles to be walked and merchandise to be evaluated.  She was a longtime member of the Darrington Hospital Guild and was heavily involved in the N.C. Riddle Scholarship Fund.  She loved dancing, babies, a good book, good food and a glass of wine and said she would continue watching Yellowstone in heaven.  She enjoyed entertaining family and friends at her home in Darrington and took great pride in caring for her flowers, lawn and landscaping with an occasional scolding if the lawn wasn’t cut to her specifications.

Jean was a woman of wisdom, integrity, loyalty, humor, beauty and, as Coco Chanel said, “a girl should be two things: classy and fabulous.”  Our Gigi was both.

The family would like to thank Dr. Gary Schillhammer for his many years of providing for Jean’s care and the dedicated doctors, nurses and staff at Cascade Valley Hospital.  Also, special thanks to Barbara Koetje, Diane Boyd and Katie Robinson for their memorable friendships.

A celebration of Jean’s life is planned for Friday March 11, 2022 at 2:00 PM in the Darrington Community Center.