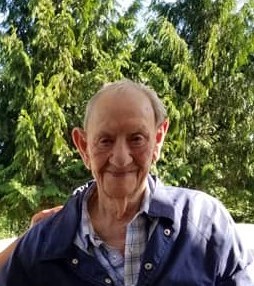 John D. Reese passed away on November 15, 2018 at the age of 94 from heart failure. He was born in Cooper, Texas the youngest of five brothers to John and Rosie Reese. He served in the CCC’s and then the United States Army during World War II. He met the love of his life in December of 1943 and just a short month later, married Angelina Garcia. Their 75th wedding anniversary would have been celebrated in January of 2019. He was a most loving and devoted husband to his beloved wife. He worked for the Montecito Water District, Santa Barbara County, California for many years and then moved on to Lompoc, California to work for Johns-Manville Corporation until he retired at age 59. In the years that followed, he and Angie took to the open road in their 5th Wheel and traveled all about our United States, meeting new friends and making memories to last a life time.  Recently he and Angie resided at Olympic Place Retirement home in Arlington, Washington.
John is survived by his wife, Angie, daughters Roseanne (Norm) Austin of Arlington, Washington and Carol (Norm) Hinrichs of Vadnais Heights, Minnesota. Grandchildren include, Melinda (Bobb) Carpenter, Ronald Anderson, Teri (Bobb) O’Connell, Troy Goldstein, Albert William Anderson, Rene (Anderson) Fenner, Melissa (Shields) Robinson and Jennifer Shields. 15 Great Grandchildren and 3 Great Great Grandchildren as well as many step grandchildren and great grandchildren, all of whom greatly loved this angel of a man.
A Celebration of Life will be held at Olympic Place Retirement Community, 20909 Olympic Place, Arlington, Washington 98223 on December 8th at 2:00 p.m., with the Army Guard presentation of the flag to his wife. Remembrances’ can be made to the Alzheimer’s Association or your favorite charity in honor of John. Notes of condolences can be sent to Angie Reese at her residence in Olympic Place.
Previous Shirley Ann Hallgren
Next Norm Bresnan