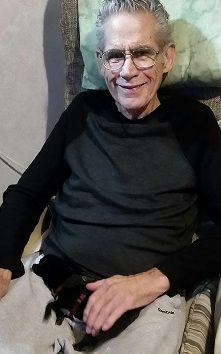 Dad served in the Navy and fought in the Korean war.  He lived life with passion and spontaneity. He always lived a bit on the edge.  Race car driver, Snowmobile enthusiast, hang gliding and any other crazy stunts he could pull off. He loved hard, played hard, but worked hardest. He had the most beautiful mind and firmly believed where there was will there is a way. His ability to repair anything and think outside of the box to invent things kept us all amazed. He found himself “at home” at Lake McMurray with his gadgets, tools and enjoying his dear friends and neighbors.

Dad loved his family with an unending love and was a teacher, confidant, and rock to his grandchildren.  Giving them a wealth of knowledge through working side by side with them from the time they were out of diapers. He will forever be held in their hearts.

He gave his life to Christ in 2018 and fell in love with a little Chihuahua named Leo who left for Heaven unexpectedly just days before Dad did.  Dad and Leo are now together in Heaven and loving their family completely.