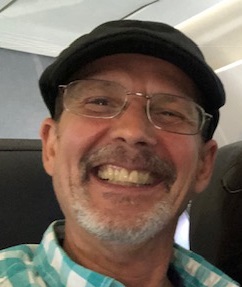 Todd Kealoha (Alan) Giesker, 56, passed away at his home in Arlington, WA after a 10 week battle with Pancreatic Cancer.

Todd was born in Seattle, WA and graduated from San Mateo High School in California with the class of 1980. He then served 4 years in the Air Force where he was stationed in Nebraska

Todd spent a few years in Lake Tahoe, CA but moved back to WA in 1990 for more job opportunities. As a single dad, Todd did whatever it took to provide for his son Michael, such as transporting him to daycare and himself to work on a bicycle when they were without a car. Michael was the light of his life and Todd was no slacker!

Todd found his niche in 1991 when he was hired by United Electric Supply in Everett, WA where he worked for 4 years until he left to work for North Coast Electric. Todd worked his way up from the warehouse, to sales, manager and finally a purchaser/buyer. Todd worked for North Coast for 22 years and considered it the best company he had ever worked for.

Todd met Linda at North Coast in 1997 and they married in 2004. They worked together at North Coast Electric for 20 years. Todd and Linda made their home in Marysville, WA for 15 years before moving to Arlington in 2016

Todd was a quiet guy (unless he’s had a few beers), kind, and extremely patient. He would always stand up for anyone he felt was being taken advantage of. He hated greed and felt that people should be thankful for what they have and should not put themselves in debt for more than they needed. He just wanted everyone to get over themselves, stop being petty, and lose all the drama, and just get along with each other.

Todd loved being one with nature and would rather be hiking, camping, or working in the yard and garden than anywhere else. He and Linda were happiest never having to leave their property and would rather spend all their free time digging in the dirt.

Todd worked tirelessly after work and on weekends no matter what the weather and created a big beautiful vegetable garden, herb garden and the beginnings of an orchard and food forest. He enjoyed sitting on the porch in his cut offs, drinking a beer at the end of a long day and being proud of their accomplishments.

Todd had 6 grandchildren and loved to show them how things grow, where real food comes from and how to feed the birds and the worm bin.

Todd wanted nothing more than to practice permaculture, get back to the basics of what really is important and live the simple life where he and Linda could survive on one income while creating their idea of the perfect life.

Todd and Linda were able to fulfill one of their goals of seeing Italy and Spain in May of this year, before committing the rest of their lives on perfecting their food forest.

He eventually wanted to be able to quit the 9-5 and live off what they grew and raised. They were going to “get serious” when they returned home from Europe at the end of May. They were devastated with his diagnosis just 7 weeks after they got home. He felt cheated and was not going to let his life be cut short. He fought hard and courageously through the pain and suffering. He was determined that it was not going to take away his dream. Todd fought the battle with every ounce of strength he had for 10 weeks.

Todd also leaves his North Coast family that supported him and always had his back through tough times and continues to support Linda with their kindness and generosity.

Per Todd’s wishes he was cremated and did not want any services. Linda will hold a celebration of Todd’s life in the Spring of 2019. The actual date is to be determined, but all who knew him will be invited to attend.