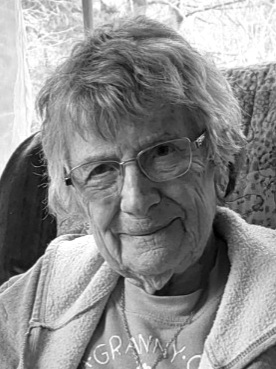 Mary E. Thompson Taht was born on June 16, 1925 at home on Spruce Way in Alderwood
Manor, Washington, after her twin brother John (Bud) Thompson. Mary passed away peacefully
and joined her Savior Jesus Christ on May 7, 2022, with family by her side.

Mary’s parents, John A. Thompson and Nadine Branin Thompson, homesteaded near the
Township of Alderwood Manor in 1918. Mary thoroughly enjoyed growing up in the country
and being part of the community of Alderwood Manor, along with her sisters Margery, Frances,
Eleanore, and Drusilla, and her brother John.

Mary attended grade school in Alderwood Manor and graduated from Edmonds High school,
Class of 1943. She played flute with the Cascade Youth Symphony, was involved with her
church, and was active in various clubs during her high school years.

After graduation, Mary lived at the YWCA in downtown Seattle, and furthered her art education
at the Cornish College of the Arts during the days and worked for the Boeing Company as an
aircraft mechanic during the night shift. On weekends, Mary enjoyed going to dances at the
USO club with her friends. At one such dance, Mary met Richard (Dick) Taht, a Navy serviceman
stationed in Bremerton, Washington. She said, “He was a good looking fellow and was the
sweetest, funniest guy I’d ever met.” They were married in the Alderwood Manor Community
Church in December 1946.

Mary and Dick traveled to the Canal Zone in Panama for their honeymoon, where Dick’s parents
Clarence and Ruth, his brother Bob, and his sister-in-law Bettie lived. Mary loved living in the
Canal Zone and recounted many wonderful times spent with Dick’s family and newfound
friends. Mary and Dick returned to the States in the early 1950s and settled in a small house on
Mary’s parents’ property. In time, they built their own home there.

While living in Lynnwood, Mary enjoyed raising her three children, Richard (Rick), Cynthia
(Cindy), and Donald (Duffy). She took great pleasure in being a stay-at-home mom, a Cub Scout
den mother, and a Sunday school teacher for many years at Alderwood Manor Community
Church. When her youngest son Donald started grade school at Spruce Elementary, Mary
volunteered as a teacher’s aide and was also a playground monitor. Mary loved all the children,
and she always had a gaggle of kids around her who loved her dearly. After a few years of
volunteer service, the school district hired Mary as their full-time librarian at Spruce
Elementary.

In 1972, Mary’s working career continued as Program Director for the South Snohomish County
Senior Center in Edmonds, Washington, a position she held until her retirement in June 1990.
Mary had a remarkable love and gift for working with seniors. She had a special enthusiasm,
creative ability, and infectious smile, as well as a cheerful, kind, and thoughtful attitude that
was a sheer delight for many seniors.

Throughout Dick and Mary’s married years, Mary remained close to the people whom she grew
up with and who were her close school chums. Her young family became a part of a core group
of 5 families that enjoyed many wonderful times together, raising their children, going on car
camping trips, and having back yard gatherings and picnics. The most looked forward to event
was the annual Sea-Fair party and watching the “Gold Cup” hydroplane races. The adults also
found time to escape and get together for the Saturday night buffet and dancing at the local
Elks clubs.

After living 38 years in Lynnwood, Mary and her husband retired to a lovely home on John Sam
Lake in Tulalip, Washington. This was a wonderful home where family and friends would gather
often for barbecues and swimming parties. In her retirement, Mary enjoyed life to the fullest.
With her husband, Mary enjoyed spontaneous road trips, camping trips in their motor home,
gathering with friends and family at Ocean Shores, and even a cross country journey to visit
grandchildren and great grandchildren on the East Coast.

Mary remained active in her local church, the First Baptist Church in Marysville, and later the
Grove Church. At First Baptist, Mary was part of an outreach team that conducted worship
services every Sunday at the Marysville Care Center. Mary was also active at the Carl Gibson
Senior Center in Everett, where she took her passion for clog dancing. She taught weekly clog
dancing classes there, as well as at the Stillaguamish Senior Center.

In 2013, Mary moved to a lovely senior community in Marysville, where she could remain close
to all the activities that she still loved to participate in. Here she became an avid cookie baker
and was fondly known as “The Cookie Lady” by the residents of her small community. Her
delight was making cookies just to give them away to spread goodness and joy to those who
received them.

Mary was a very special lady, full of joy and grace, and loved by many who knew her. Mary was
deeply committed to her faith and in her love for God. Her life was truly a reflection of
discipleship and God’s love for others. The loving light of Jesus Christ shown through her every
day in her unfailingly beautiful smile, her friendly welcoming eyes, her loving kindness, her
generosity, her giving heart, and her grateful spirit. Mary touched so many lives in so many
different, positive ways. Her love for others was truly unconditional.

God blessed Mary with a long, joyful life enriched and encircled by friends, family, and
opportunities. She was preceded in death by her husband of 67 years, Dick Taht; her parents
John and Nadine Thompson; her in-laws Clarence and Ruth Taht; her sisters Margery, Frances,
and Eleanore; her brother John; and her oldest son, Richard Taht.

Mary is survived by her daughter Cynthia and husband James, son Donald and wife Shirley, and
her sister Drusilla Upton; her many special nieces, nephews, and their families; and by her
grandchildren, great grandchildren, and many cherished friends. Mary will be missed by all who
knew and loved her.

Mary’s family would like to acknowledge and sincerely thank the wonderful people at the
Bluebird Residence in Tulalip, who loved and cared for her; Maria and Adi, owners, and Shalsie
and Dennis, caregivers. They were truly a blessing.

In lieu of flowers or other remembrances, it is asked that Mary’s friends and family consider
making a donation in her memory to their local senior center.

A Memorial Service and Celebration of Mary’s life is being planned for Friday, August 26 at
Noon at The Grove Church in Marysville, WA. If Mary touched your life, please join us.