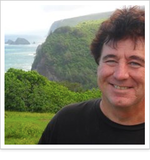 Rory was the only child of his late beloved mother, Jeanette Keith, and adoptive father Donald Keith. Rory spent a few years of his life in California and traveling the world as a golf touring pro, appearing in tournaments with greats like Tom Weiskopf, Raymond Floyd, Lee Trevino, Arnold Palmer and numerous other legends. Rory decided to settle in Kailua-Kona, Hawaii, and spent the majority of his life there. Golf was a huge part of his life, mainly because his mother Jeanette was an acclaimed class A LPGA professional, appearing in and winning numerous golf events throughout California and the United States. He said that “Mom naturally passed the gift of tournament golf to me for which I stand eternally grateful.”
Hawaiian legend, Kuke “Duke” Kahanamoku, “Father of Surfing,” was a close friend of Rory’s parents and agreed to be Rory’s godfather. Duke taught Rory’s mom to golf in his backyard on Oahu in the 1940’s. He bestowed his name, Kuke, to Rory for his middle name. As there are no D’s in the Hawaiian alphabet, the K in Kuke was turned into a D, hence Kuke is Duke in English. Rory’s home and vacation rentals in Kailua-Kona were named “Duke’s House Kona” to honor his mother and Duke.
Rory maintained and operated Duke’s House and had worked in the real estate business for many years. He was very spiritual in nature, loved and cared deeply, and always put others’ needs before his own. Rory is survived by two aunts, six cousins, and many very good friends, all of whom were very dear to him.
As he once said, my sincerest “Aloha,” (The Breath of Life), Rory.