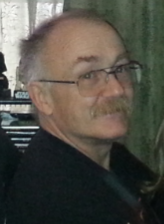 Dean passed away after a sudden heart attack following a medical procedure on May 15 th 2019
with his wife Janice by his side at Providence Hospital, Everett, Washington. Dean was born in Berlin, Germany and grew up in Tacoma. Dean graduated from Woodrow Wilson High School where he enjoyed drama, art, wrestling, and obtained a black belt in the martial arts. His talent and creative mind could be seen in the cartoons he would create as a
child. Soon after high school Dean attended college and receive Associate Degrees in
Commercial Art, Accounting, and Business Administration. He married Vivian Prunier in 1979, they divorced in 2000.
Dean worked as a commercial artist for a time in Tacoma and then his best friend Glenn Lawrence talked him into relocating to Everett for a job opportunity with a school photography business. During this time Dean dabbled in building computers at home, and used these skills to work with several companies repairing and selling computers. He also worked for a computer
store until Computer City recruited him. He stayed there for a time and then he worked for Northwest Steel Erection Company for several years as an Administrative Assistant. After that he worked part time for a couple different computer repair companies while teaching at BCTI until they closed their doors. He loved teaching and quickly became a favorite instructor there. After that Dean worked at Unisys for a couple of years, he worked for NCR for about seven years where he repaired local retail and commercial cash registers, scales, etc. He loved his customers and gained great satisfaction from being able to go into the store and rescue his customers and get them up and running. In early 2014 Dean and Janice&#39;s grandchildren were placed in their care. Unfortunately, their mother wasn’t able to regain custody which lead to them adopting their two oldest grandchildren 2016.
November 2014 Dean had a major heart attack and was in ICU for four weeks they were only able to put in one stint and then spent two weeks at a care facility to regain his strength. He was able to return to work for almost 3 months and then had his second heart event almost a year to the day of the first one. The doctors were able to place 4 more stints. This last heart attack was so severe that it damaged the rest of his heart so there was nothing the doctors could do. Dean found enjoyment in life playing computer games, keeping up on both the latest movies and those of the past, and was a true Star Trek fan. He was always an animal lover and enjoyed teaching his dog Puggles new tricks. He cherished most of all raising his two adopted grandchildren. Dean was a true family man. He always knew how to make you smile and laugh out loud. His big bear hugs will be dearly missed. A quote from Star Trek sums it up: “To know him, was to love him. Those who knew him, loved him. Those who did not know him… loved him from afar.”
Dean is preceded in death by his father Richard Dean Prunier and step-father James Troup. He is
survived by his wife of 18 years Janice Prunier and son/grandson Erik Prunier, daughter/granddaughter Ella Mae Prunier, step-son Patrick Ostrander, step-daughters Sayra Iseli (Justin Iseli) Christiana Ostrander and granddaughter Samantha-Rose Ostrander. His motherEdith Troup, siblings Madelon Moore, James Prunier (Sue Prunier), and Patty Troup along with niece and nephews.