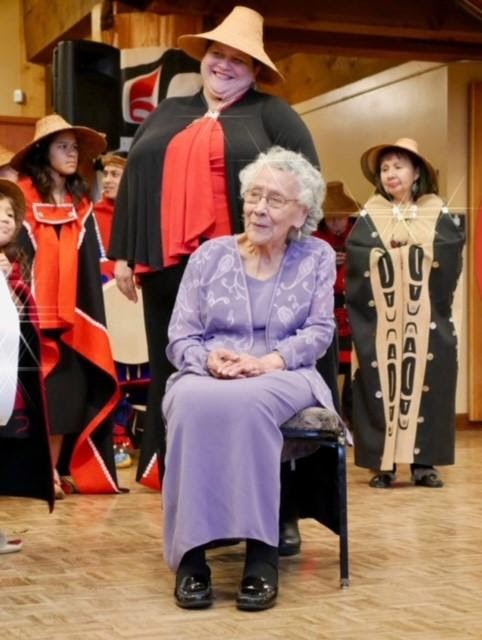 Jane’s first language was Haida, she was one of the few remaining fluent Haida language speakers and along with her sister, Delores Churchill, she shared her knowledge freely, passing her language down to new generations of speakers.

Jane began working in a cannery at a very young age and continued to work throughout her life, sewing and crafting, often creating clothing for her children and grandchildren. Jane wove and taught with her mother Selina Peratrovich at logging camps in her thirties.

Jane loved music; she played the piano as well as the harmonica. She always enjoyed dancing and reading. One of Jane’s proudest moments was when her brother Oliver Adams assented to chief Gala. Haida culture and continuation of Haida knowledge was also a great source of pride for Jane. She often tried to help local Haida artists upon her trips to Haida Gwaii, returning with art from her homeland.

Jane was a creative, hard workingwoman who was loved by many. She had five children; three preceded her Victor Adams, Pearl Farnum, and Nick Kristovich, and two surviving, Lisa Telford and Ralph Bennett and her beloved puppy Sam. Jane’s family has spanned 5 generations, eight grandchildren, nine great grandchildren and ten great great grandchildren.

Jane’s kindness, generosity, and sense of humor touched all who met her. She nurtured and guided all of her descendants throughout her life.

We are all the richer for our time spent with her.

Memorial services will be held at a later date to ensure the health and safety of Jane’s friends and family.