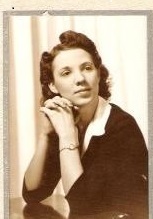 Nina Marie Pearson, 97, of Lake Stevens passed away peacefully November 25, 2018, with family members at her side. Born August 15, 1921, in Jefferson City, MO, Nina moved to this area in her early 20’s and married James E. Pearson. She trained as a riveter during WWII and later managed a millinery department in Everett. She was preceded in death by her husband, three brothers and a sister. She is survived by her three children: Jim (Barbie), Don, and Patricia, seven grandchildren and numerous nieces and nephews. A devout member of Community of Christ church, she felt the end was near earlier Sunday and had her grandson Donnie play her several Elvis spirituals including her favorite, How Great Thou Art. Her final comment on her situation was “There is so much love in this family. I feel so loved.” She will be missed. In lieu of flowers, donations to Snohomish County Hospice in her name would be appreciated.